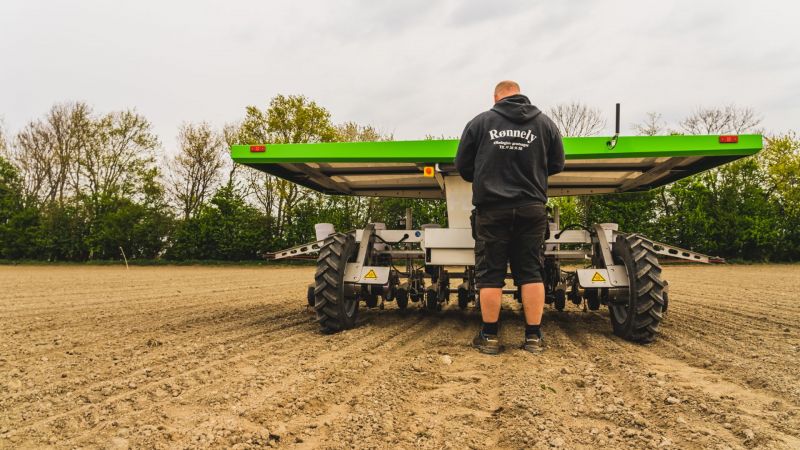 Customer story: It can do a lot and also runs on solar! 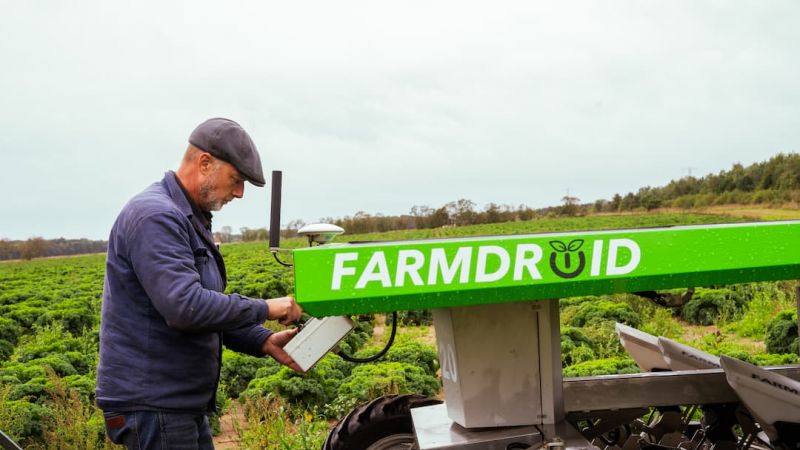 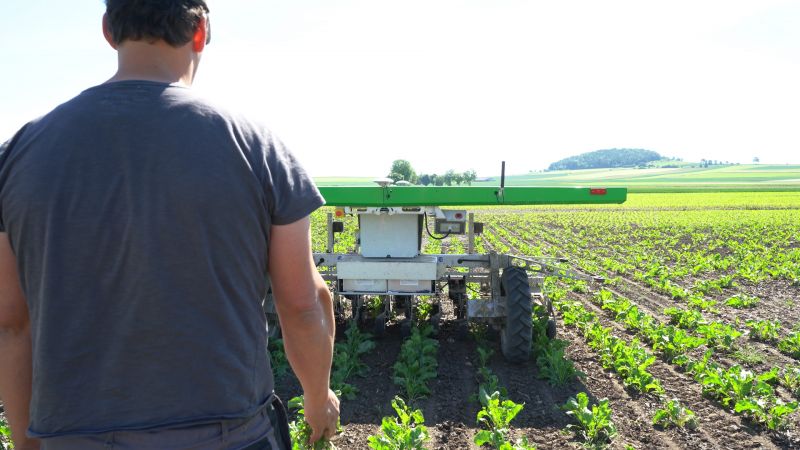 Customer story: I didn’t know what I was getting into 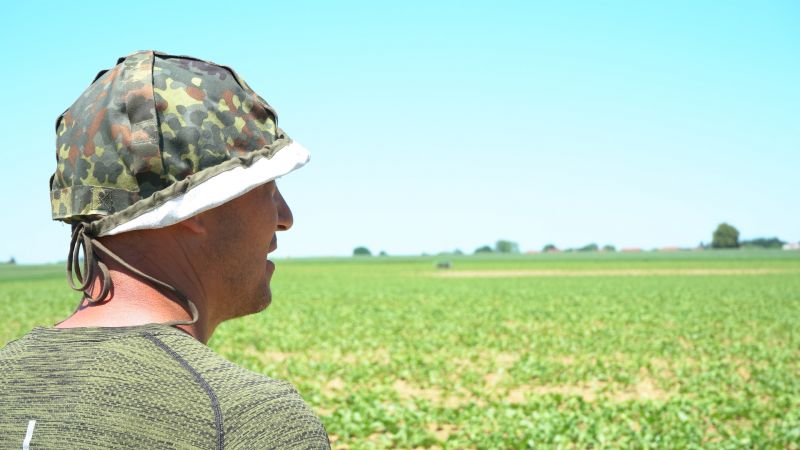 Customer story: It does a good job 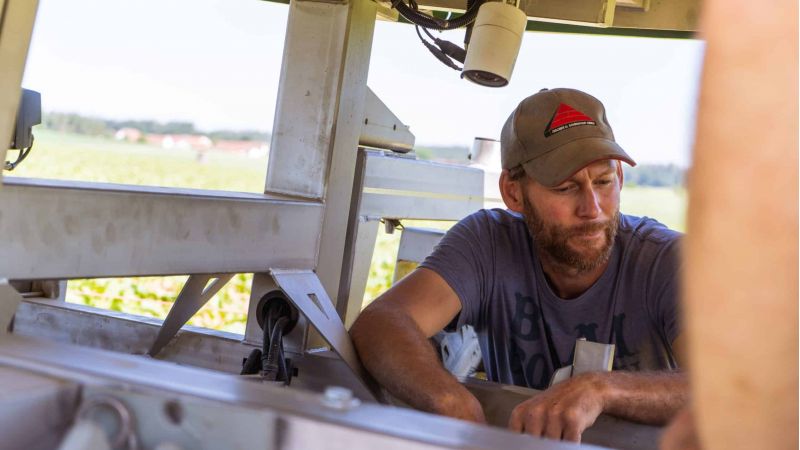 Customer Story: It was easier for me 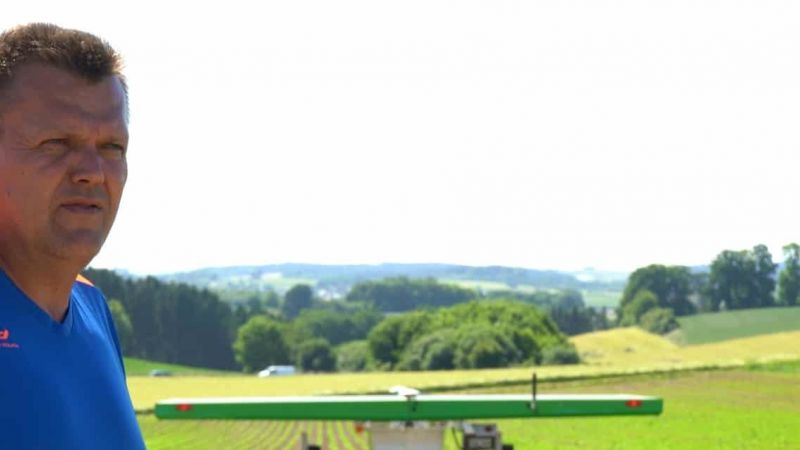 Customer Story: It was very important for us to invest in the FarmDroid 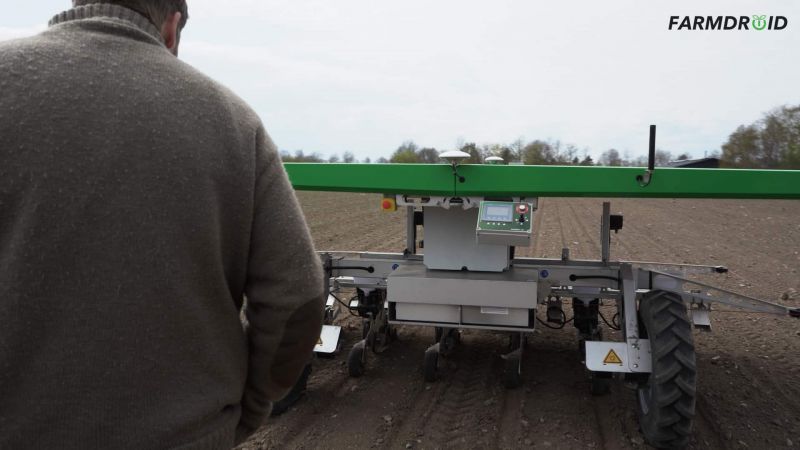 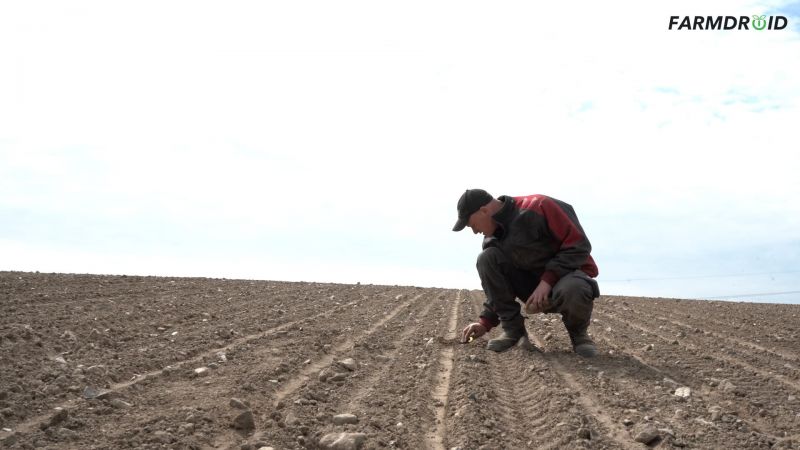 Customer Story: It’s easy to use and is very precise!

The world’s first sustainable robot that can plant, weed and hoe has joined the farm machinery and workforce of organic farmer Eberhard Weisskopf. Eberhard is a pioneering farmer in Europe’s agricultural sector who uses robotics to make organic farming a more profitable and greener business.

Passers-by often pause with astonishment when they go past Eberhard Weisskopf’s beet fields near the village of Altenweddingen in the German state of Saxony-Anhalt.

“That’s right, my robots have become somewhat of a crowd-puller. People come up and ask, ‘What’s that unmanned thing driving around in your fields?’,” farmer Eberhard Weisskopf recounts. He tells them that they are two FD20 robots made by the Danish robot manufacturer FarmDroid.

The COVID-19 lockdown prompted Eberhard Weisskopf to implement his automation plans earlier than he had expected, because it threatened his farm’s otherwise most lucrative and popular crop: sugar beets. The border closures made it impossible for him to recruit and house the forty migrant workers who usually do the hoeing of Eberhard Weisskopf’s 60 hectares of beet fields in the spring.

The timing was critical: if Weisskopf had not found a solution for weeding his sugar beets within two or three weeks, he would have had to abandon raising sugar beets in 2020.

“Raising organic sugar beets without manual labour for weeding is not an option,” Eberhard Weisskopf points out.

“I heard about FarmDroid by accident, and the robots saved this year’s sugar beet harvest, because otherwise we’d have given up on them.”

The solution was to invest in two FD20 robots from FarmDroid in Denmark. Each robot is designed to weed and hoe 20 hectares per season. They do this by constantly hoeing for eight weeks until the beet plants have grown big enough to dominate the field themselves. During this period, the robots manage to run through the fields five times because they operate almost round the clock – weeding thoroughly and slowly at less than one kilometre an hour.

The repayment period is reasonable, in Eberhard Weisskopf’s opinion:

“It takes them 100–120 hours per hectare to manually hoe the beets, and the migrant workers cost me EUR 15 an hour. The investment in the FarmDroid robots will pay for itself in two years,” notes Eberhard Weisskopf, who is relieved to be released from the heavy responsibility of housing forty employees on the farm for a few months. Now, the 700-hectare farm has four year-round employees whose job description has been widened to include the title ‘robot operators’.

When rows in a beet field are hoed manually, experience shows that 20–30% of the beet sprouts are removed because it is hard for the human eye to discern between weed and crop. This wastes about 20,000 beet sprouts per hectare. Thanks to his FD20 robots, Eberhard Weisskopf has now eliminated this waste.

By contrast with other solutions on the market, the FD20 does not depend on camera technology to distinguish between weeds and beet plants; instead, the robots know exactly where the beet seeds are because they planted them. The robots navigate using high-precision GPS technology and operate at just the right (slow) speed. This enables them to plant the beet seeds with such precision that they can subsequently weed plants and rows just as precisely. This way, the robots adroitly hoe around beet plants, even when the beets are only seedlings.

The robots hoe weeds within the rows, meaning between the individual plants, but they also do inter-row cultivation using a wire. This pares off weed sprouts 1 to 3 centimetres into the soil between the rows. The robot weighs substantially less than a tractor and equipment, i.e. less than 800 kilos, which keeps the soil’s micro-structures intact and eliminates tractor fumes.

“The sugar industry’s demand for organic sugar beets is rising dramatically because of the rising consumer demand for organic products. I’m experiencing that sugar refineries are very interested in the possibilities of automating my sector. Being one of the first to invest in automation will give

me a strong position as an experienced robot-user in the years ahead,” Eberhard Weisskopf predicts.

In general, he sees great potential for agriculture in knowing exactly where crops are planted. He also thinks that conventional farmers can use this knowledge to significantly cut down on pesticide use by spot spraying, for instance.

Several other crops will be automated

The lessons learnt in the first year of automatic weed control in his beet fields are so satisfying that Eberhard Weisskopf is now considering whether to deploy his robot fleet in his rapeseed and onion fields as well, as they need to be weeded in early spring. Beetroots are another possibility, as are other crops that require inter-row and inter-plant weeding to get reasonable yields. Eberhard Weisskopf has a total of 700 hectares of organically cultivated farmland.

Eberhard Weisskopf implemented robotics technology on his farm in close collaboration with Solar Andresen, FarmDroid’s local distributor in North Germany, but he can also call FarmDroid’s direct hotline if the need arises.

As an organic farmer, Eberhard Weisskopf is concerned about ensuring sustainable farming operations. This is why an obvious benefit of FarmDroid is that its robots are solar-powered. In relatively clear weather, the four photovoltaic panels, comprising the robot’s ‘roof’, can generate up to 20 kWh a day.

“The sun enables the robots to move about powered solely by a climate-friendly, carbon-neutral fuel, and I can also lower my consumption of diesel fuel. In my view, technologies like FarmDroid’s are the future of agriculture. We have to streamline our operations, not least on organic farms, and as a business we can actually help prevent severe climate change as well. I believe that robotics technology will boost the proliferation of organic farming because it helps us work smarter without impacting the environment,” Eberhard Weisskopf says.

The future of sustainable agriculture